High-brightness, high-power LEDs (HBLEDs), like any other semiconductor device, generate heat. Since it is well known that high temperatures can significantly shorten an HBLED's lifetime as well as negatively impact brightness, temperature control is required. However, in order to control the temperature, a designer first needs to determine how to monitor the temperature of the LED die, and that is precisely the role of a negative temperature coefficient (NTC) thermistor in an LED lighting system.

The NTC thermistor's sensitivity to temperature changes, even in small increments, enables the device to be used in temperature sensing/control applications. These devices allow the LEDs to withstand higher current over temperature (via compensation) to enhance the LED's lifetime. The current can be controlled according to ambient temperature by the NTC thermistor as shown in Fig. 1.

Figure 1: The NTC thermistor can control current by sensing temperature and is used for overheating alerts and in shutdown functions. (Courtesy of Panasonic)

"NTC thermistors allow the HBLEDs to be used at their full operating capabilities for a given lifetime, meaning higher current at lower ambient temperatures and adapted lower currents when temperatures go up to increase lifetime and still guarantee a good lumen output," explained Vishay’s Van Beneden.

NTC thermistors are available in several packaging options that make them compatible in both remote sensing applications, where the LED substrate and LED driver circuitry are physically separated, and in combined LED driver-substrate applications.

A few examples show that both surface-mount and leaded NTC thermistors can find homes in remote and compact LED lighting applications.

If the LED and control circuitry are mounted close together, for example in small LED lamps, a designer will typically select a SMD device and mount it very close to the control circuit. In this example, the NTC thermistor reacts quickly to temperature changes to control the circuit. Remember, the smaller the sensor, the less energy it takes to heat them.

NTC SMDs, like Vishay's NTCS0805E3, NTCS0603E3, and NTCSMELFE3 devices and Panasonic's ERT-J series, can be used in these smaller applications where they are directly mounted on the printed-circuit board (PCB) or substrate. These SMD devices are typically used in applications where the drivers and LEDs are in one confined area. The thermistors must be near the LED so they can sense the LED temperature.

"With an NTC thermistor, you're able to more closely approach the LED's allowable current curve, which enables greater brightness while at the same time maintaining the life of the LED," said Leonard A. (Len) Metzger, senior applications engineer for passive electronic components at Panasonic Industrial Devices Sales Co. of America (Figure 2).

Figure 2: In a simulation of two circuits, with and without an NTC thermistor, Circuit 2 with a thermistor allows higher current over temperature for the LED. (Courtesy of Panasonic)

If the control circuitry is separate from the LED substrate, such as in a larger lighting enclosure to replace tube luminescent (TL) lights, a designer will likely choose a remote sensor that needs to be connected with long leads. For that solution, NTCs have some advantages because they have many mounting options, and as a small device, they react very quickly to temperature changes, making them one of the better technical and economical choices.

In any case, the sensor needs to be mounted close to the LED substrate where the heat is generated. This type of design could use surface-mount or leaded parts, attached with a screw, glue, or thermally bonded to the substrate.

In remote applications, depending on the size of the substrate or mounting platform, the temperature also needs to be checked with good accuracy and follow at least the same possible rise of temperature, according to Van Beneden. Vishay's mini Lug NTCALUG03 is a good match for these applications. The device is fast, following temperature rises in excess of +2°C/s, and accurate, following that temperature within a 2°C to 3°C limit.

SMD NTCs may also be used and mounted on the LED die substrate to sense remotely the most critical temperature zone, added Van Beneden.

Vishay recommends looking for devices with medium to good accuracy (+/-2°C to +/-5°C), which is important for good absolute temperature sensing and safe-operating HBLEDs.

NTC thermistors are available in a variety of mounting options. They can be screwed, glued, pressed, or bonded. The connection of the NTC thermistor to the LED substrate is important because it relates directly to sensing accuracy and response time.

The way the NTC thermistor is bonded to the substrate, for example, can impact the thermal resistance between the two. Van Beneden said "the electrical and thermal connection to the board or substrate and the exact location of the sensor relative to the LED dies is important for accuracy, response time, and thermal gradient."

In a case where the sensor cannot be mounted ideally, "some logic can always take some placement issues into account," noted Van Beneden.

One caveat for designers is that NTC thermistor suppliers do not all offer the same components in their product portfolio. Unlike other passive components, datasheets do not always offer the same values, in this case resistance values, making the system designer's job a little tricky. However, many LED driver manufacturers will indicate requirements for the NTC thermistor such as 100 kΩ with a certain B value in their application notes.

The NTC thermistor reference resistance value will depend on the driver logic and usage, but most of the time a 10 kΩ up to 100 kΩ can be selected. It will depend on the safe operating temperature range and needed accuracy/stability in that range, according to Van Beneden.

Selecting the right NTC thermistor depends on your application's requirements, whether it's a remote sensing application or a compact LED lighting system. You need to keep in mind several key specifications such as resistance range and tolerance, operating temperature range, temperature coefficient of resistance, temperature accuracy, package size and style, and mounting options.

Thermistor resistance/temperature curves are provided by suppliers to help select the best fit for your application. Also always keep in mind that accuracy, response time, and thermal gradient depends on the way the NTC thermistor is mounted. 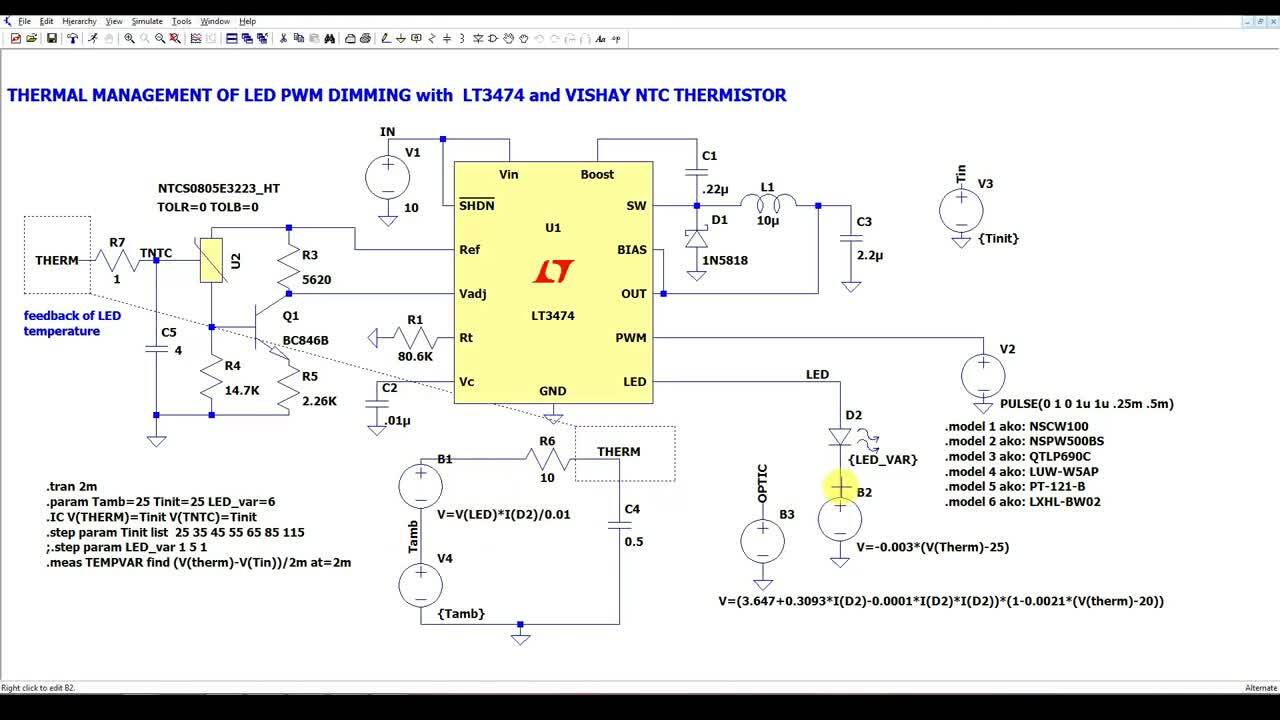 For more than 20 years, business and technology writer Gina Roos has contributed both print and web articles to influential trade publications in the electronics industry. These publications include EE Times, Electronics Supply & Manufacturing, Electronic Business, Electronic Design News, Government Computer News, and Purchasing magazines. Roos was a major contributor to EE Times’ eeProductCenter website, specializing in sensors, passives, interconnects, and electromechanical devices. She also wrote the “In the Channel” column about the electronics distribution industry for ProductWeek. Roos has a Bachelor of Science degree in Journalism from Suffolk University in Boston, Mass.